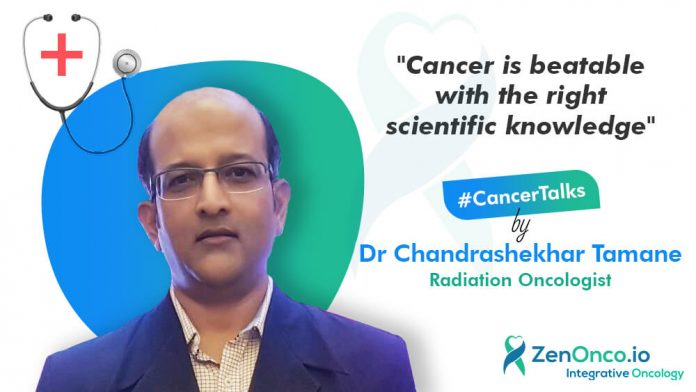 Dr Chandrashekar is a Radiation Oncology specialist with 28 years of experience. He completed his training at Tata Memorial Hospital and is known for his social work, having helped thousands of cancer patients. He also runs the Getwel Cancer Clinic in Aurangabad. He is a genuinely inspiring personality, working towards a cause that he strongly believes in.

What inspired you to be an oncologist?

When I started in this field, 25-30 years back, everyone used to think that if a person is diagnosed with cancer, then even after taking treatment, ultimately he/she will die. It was the overall scenario of Cancer Treatment in India at that time. But still, many doctors were going into oncology department to try to reduce the stigma associated with cancer. I understood that cancer was beatable with the right scientific knowledge, and what was needed was to explain and counsel the patients and their caregivers about the proper treatment. That is why I became an oncologist, to help reduce the stigma and to enable maximum people to get cured.

We are working together for this cause, but in the middle of it, some fraudsters are trying to make money out of the patient’s desperate situation. How can we avoid them?

This happens in almost every field. The patients need to be slightly smart, but I understand that it is not possible for everyone, as we have a rural population where the awareness about all this is significantly less. So, the best thing to do if any confusion arises is to go to a medical college or a government hospital. There will be at least a rural health centre, where they can walk into, who will guide them properly. Whatever investigations that are needed, could be done at a very reasonable rate at the centre itself. Later, if the patient is convenient with the treatment, they can continue, but if the patient has doubts, then they should take a second opinion.

Do you also work with NGO’s for cancer care?

There are many NGOs that I am associated with, including Renuka Medical Foundation. This was initiated by myself and my colleagues from medical and other fields. We were thinking of ways in which we could help patients having malignancy or some other medical problem, and unable to spend money for it. We came to the conclusion that first, they should get expert advice. So, in this foundation, we have a different specialist from different specialities. If any patient comes to us with a problem, we analyze it and give the patient the best possible opinion of Cancer Treatment in India and guide them through the finances, connecting them with the right doctor, counselling them and getting them Chemotherapy and other treatments at a very subsided rate. This foundation was established in 2007, and in almost 13 years, we have helped lakhs of patients through it.

Could you throw some light on the causes and stigmas attached to breast cancer?

In females, breast, cervical and ovarian malignancy are very common, but amongst these, Breast Cancer is increasing day by day. In the urban population, one out of 22 females is diagnosed with Breast Cancer while in the rural population, it is one in 32 females. The leading cause for this is the lifestyle; people do not have time even for themselves. Urbanization and addiction to Alcohol and smoking have increased the incidence of cancer. Most of the time, the patient’s family asks us not to disclose the diagnosis to the patient. But this is a wrong trend commonly seen across Cancer Treatment in India. I would say that patients have the right to know about their diagnosis and the outcome of it. We should not hide anything from the patient; we should discuss everything with them and counsel them appropriately.

What is the difference between Immunotherapy and Targeted therapy?

The principle of Immunotherapy is to trigger the immunogenic cells, which protect the patient from getting any viral, bacterial infection or mutation in particular cells. If we are using Immunotherapy, we are boosting particular cells to grow more, so that the body becomes immune to a particular cell or infection. Targeted therapy- Let’s take the example of Lung Cancer. Previously, if a patient was diagnosed with lung cancer, he used to go for surgery, and every malignant growth visible was removed, and further treatment was given to him. But now, we look at the mutations at the cell level. If the mutations are present in a patient, then we have oral molecules, which are called targeted molecules. These targeted molecules will act on those particular cells, and they target and rectify the defect at the cellular level itself.

What should we know about genetic cancers?

Around 30% of Breast Cancer in females is hereditary. Now certain genetic markers are available like BRCA 1 mutation. If the patient has this particular mutation, then there is the possibility that the sister or daughter of the patient can become a carrier of that, and thus, will have higher chances of getting cancer. These members will be put in high- risk category so that they will undergo regular checkups to diagnose it early.

What are your thoughts on smoking and lung cancer?

Any form of nicotine consumption causes Lung Cancer. But there are other factors as well, like genetic abnormalities, cellular changes at a certain level, or some hereditary mismatches. They exist in your body, but they are revealed only at a later stage of life, and because of that, a non-smoker could get diagnosed with Lung Cancer.

Your most challenging case.

There are n number of cases, but I will share one about a little girl of about 8-9 years old, who came with her grandmother. Her grandmother told me that she is not able to open her mouth. So, as I was trying to examine the oral cavity of 9 years old girl, I was surprised that her oral opening was just about one finger. I was confused about what to ask her because a 9-year-old kid doesn’t even know about tobacco, smoking, or anything of the sort. I was discussing everything with her grandmother when she told me that she had a habit of chewing betel nut, and whenever she ate betel nut, her granddaughter asked her to give some to her too. So, she used to oblige by giving her the betel Nut by putting some lime on it. That’s how I found the cause and explained to the grandmother not to give betel Nut to her granddaughter, because it could aggravate and cause cancer too. She underwent treatment and got recovered from it.

What are your thoughts on palliative care?

Side effects and preventive measures regarding cancer

With the availability of better treatment procedures, the side effects of radiation and Chemotherapy have reduced considerably. Eating healthy and nutritious food, exercising regularly, and refraining from any addiction will help to keep cancer at bay.