Most patients perceive a lump or thickening in their breast as an early symptom of breast cancer.

For many women, a lump in their breast is the first sign of breast cancer. The majority of breast lumps are not cancerous (benign).

The following are the most common benign breast lumps:

It is critical to have a breast lump evaluated by a doctor at all times. They will arrange for tests to determine whether or not your lump is malignant.

A LUMP OR SWELLING IN YOUR ARMPIT

The lymph glands in your body are normally unseen. When you get an infection or a cold, they swell up, including the lymph nodes in your armpit.

Breast cancer that has progressed to the armpit is a less common cause of swollen lymph nodes or a lump in the armpit.

CHANGE IN SIZE, SHAPE OR FEEL OF YOUR BREAST

Your breast may appear larger or have a different shape than usual as a result of cancer, and it may also feel different.

Just before their menstruation, many healthy women notice that their breasts are lumpy and sore.

Being aware of your breasts might be beneficial. This entails learning to know your breasts’ size, shape, and feel.

The skin could resemble orange peel or have a different texture. Other breast conditions may be to blame. But make an appointment with your doctor to rule out anything that is out of the ordinary for you.

FLUID LEAKING FROM YOUR NIPPLE

Fluid seeping from a woman’s nipple who isn’t pregnant or breastfeeding could be a symptom of malignancy. Other medical issues, however, can also contribute to this.

CHANGE IN THE POSITION OF YOUR BREAST

One nipple may sink into the breast or turn in. It may appear or feel different from what you’re used to.

If you detect anything strange or unexpected with one or both nipples, consult your doctor.

Breast pain is fairly frequent, and it’s usually not caused by cancer. For a short while, you may experience soreness in one or both breasts, but this will pass. Even if you have a number of testing, there may be no evident reason for your pain.

If you’re experiencing breast pain, make an appointment with your doctor. They can advise you on how to handle the discomfort and whether or not tests are required.

If you experience any of these symptoms, you should see a doctor.

PAGET’S DISEASE OF THE BREAST

This is a rare skin disease that can indicate the presence of breast cancer. A red, scaly rash on the nipple and surrounding area is one of the symptoms. This condition can be itchy and resembles eczema. At initially, it’s often mistaken for eczema.

If you see any alterations in your breast, consult your doctor.

The indications of metastatic breast cancer vary depending on where cancer has spread and at what stage it has progressed. Metastatic illness might manifest itself without causing any symptoms. Pain, nipple discharge, or a lump or swelling in the breast or underarm may be signed if the breast or chest wall is afflicted. Due to elevated calcium levels, symptoms such as discomfort, fractures, constipation, and decreased alertness may occur if the bones are impacted. Shortness of breath or breathing difficulty, coughing, chest wall pain, or severe fatigue is some of the symptoms that can occur when tumors originate in the lungs.

Nausea, excessive weariness, increased abdominal circumference, swelling of the feet and hands caused by the fluid collection, and yellowing or itchy skin are all indicators of a liver problem. Pain, disorientation, memory loss, headache, blurry or double vision, problems with speech, trouble with movement, or seizure may occur if breast cancer travels to the brain or spinal cord and forms tumors.

Symptoms of angiosarcoma of the breast

Angiosarcoma is a rare type of breast cancer that develops inside the lymphatic and blood arteries. This form of cancer can only be diagnosed with certainty by a biopsy. Angiosarcoma can lead to changes to your breast skin, like the formation of purple-colored nodules that seem like bruises. If bumped or scraped, these nodules may start bleeding. These discolored patches may get larger over time, causing your skin to appear bloated in that location. Breast lumps may or may not be present if you have angiosarcoma. Angiosarcoma may develop in the affected arm if you also develop lymphedema, which is swelling produced by a buildup of lymphatic fluid. Lymphoma can develop as a result of cancer treatment that destroys lymph vessels.

Even if papillary carcinoma isn’t present, normal mammography can detect its progression. The following are some of the most prevalent symptoms associated with this form of cancer:

Papillary carcinoma is most commonly detected as a 2 cm to 3 cm cyst or lump that may be sensed with the hand throughout a breast self-examination.

According to the American Cancer Society, the majority of phyllodes tumors are benign, but one in every four is malignant. Breast connective tissue cancer is an uncommon kind of cancer that affects the connective tissues of the breast. The majority of patients don’t have any pain, but they may have a lump. Phyllodes tumors can grow quickly, although they usually do not spread to other parts of the body. These tumors must be surgically removed since they can develop quickly and strain the skin. If a tumor is cancerous, your doctor may prescribe a mastectomy to keep it from returning, particularly if the tumor wasn’t removed entirely during the initial operation.

Breast cancer isn’t usually linked to those who were born with a male gender assignment. Male breast cancer, on the other hand, can strike at any age, though it is more prevalent in elderly males.

Many people are unaware that persons who are born male have breast tissue as well, and that these cells can develop malignant alterations. Breast cancer is less common in men than in women because male breast cells are less established than female breast cells.

A lump in the breast tissue is the most prevalent symptom of breast cancer in people who were born male.

Symptoms of male breast cancer, aside from a lump, include:

Because most guys don’t check their breast tissue for lumps on a regular basis, male breast cancer is generally detected much later. 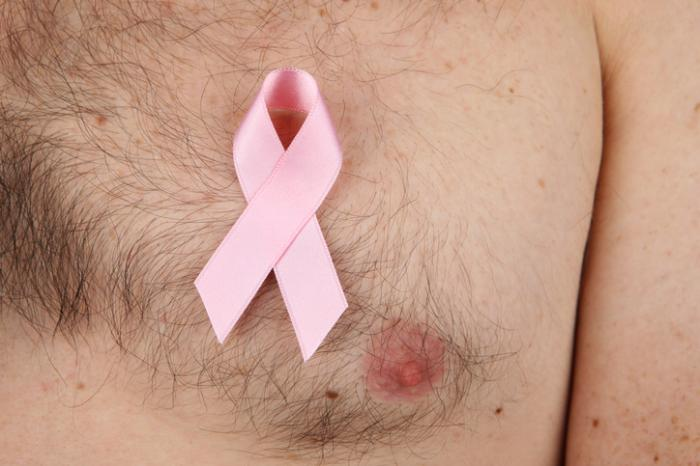