Milk thistle (Silymarin) maybe a flowering herb associated with the daisy and ragweed family, referred to as Mary thistle and milk thistle. The milk thistle plant consists of a thin, long stem with spiny leaves and a purplish-pink thistle at the top. The white streaks are present on the milk thistle plant’s green leaves. A milky white liquid oozes out when the leaves are ripped and crushed. It is native to Europe’s Mediterranean region. Now it grows worldwide, including South Australia, northern Africa, and parts of South and North America.

Milk thistle, sometimes known as Silymarin, is one of the main components of the plant’s seeds. Silybum marianum, commonly known as milk thistle (MT), is an annual/biennial plant of the Asteraceae family. The Dry extract containing mainly flavonolignans (about 70%–80% w/w) and polymeric and oxidized polyphenolic compounds consisting of a mixture of flavonoids. Silybin, the main flavonolignan of SilymarinSilymarin, is rapidly absorbed from the gastrointestinal tract, undergoing extensive enterohepatic circulation. Both the terms milk thistle and SilymarinSilymarin are often used interchangeably, even though they aren’t the same.

People have traditionally used milk thistle for treating problems related to the gallbladder and liver. Silymarin is the active ingredient of the milk thistle. It is an antioxidant compound taken from milk thistle seeds. Its actual benefit is unclear but used as a natural treatment for cirrhosis, jaundice and hepatitis disorders. Researchers also claim milk thistle may also provide heart benefits by lowering cholesterol levels and also help the diabetic patient who has type 2 diabetes and cirrhosis. Silibin is rapidly absorbed from the stomach, but absorption is low due to low water solubility.

In the market, Milk thistle comes in capsule, powder, liquid extract or pill forms. You can use the powder to make tea, blend it into a smoothie, or stir it into water. Swallow the capsule or tablet with a glass of water. and can be added as a liquid extract to water or tea. 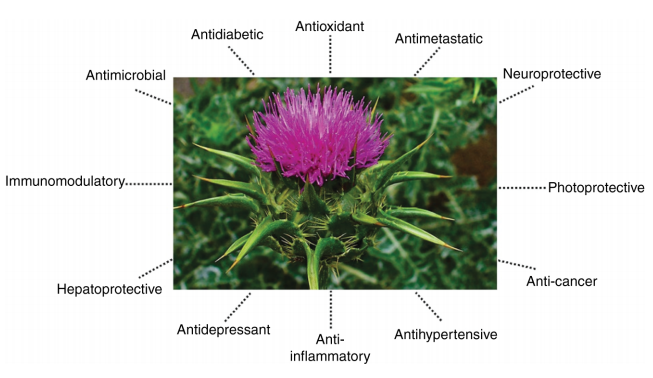 Silymarin or milk thistle is known to be an effective antineoplastic compound from a wide variety of in vitro and cancer treatments, including the carcinomas of skin cancer, liver cancer, cervix cancer, breast cancer, lung cancer, bladder cancer, prostate cancer, kidney cancer and oral cancer. The antitumor effects of Silymarin are due to the inhibition of abnormal cell proliferation, induction of apoptosis through cell cycle disruption, and interference in the intrinsic and extrinsic mitochondrial pathways. other effects involved in the expansion and invasion of tumour cells in angiogenesis and metastasis.

These protective effects of SilymarinSilymarin suggest that it can be used in therapy and potentially prevent or reduce chemotherapy and radiation-induced toxicity. Silymarin and silybin have a substantial radioprotective property to prevent the DNA damage induced by gamma rays.

Silymarin exerts antiinflammatory actions and attenuates autoimmune and immune‐mediated liver diseases, possibly via suppression of oxidative and nitrosative immunotoxicity and T‐lymphocyte function. The stimulating effect of silybin on ribosome formation can have therapeutic implications in repairing damaged hepatocytes and restoring normal liver functions. Silymarin can prevent the absorption of toxins into the hepatocytes by occupying the binding sites and inhibiting many transport proteins at the cell membrane.

By lowering low-density lipoprotein(LDL) “bad” cholesterol levels, milk thistle may reduce the chance of developing heart disease. It can also be taken with cholesterol-lowering medications, like statin.

Silymarin has also been used to prevent CVDs, such as vascular dysfunction, hypertension, atherosclerosis, ischemia, cardiac hypertrophy and ischemiaAlthough the use of antioxidants cannot reverse the damage caused by such CVDs, they can minimize CVD complications in the patient.

Milk thistle, when combined with traditional treatment, helps in improving diabetes. Studies have shown an improvement in cholesterol and decreased blood sugar levels in patients with diabetes type 2.Researchers also have found milk thistle helpful in improving insulin resistance, a crucial part of diabetes type 2. Milk thistle is regarded as a potent agent against insulin resistance and diabetes-induced hyperglycemia

The antioxidant capacity of Sylimarin can improve several parameters in diabetic patients. the antiinflammatory, hypolipidemic and antihyperglycemic properties of Silymarin may also have beneficial effects on diabetes