In the United States, breast cancer is the second most prevalent cancer in women (some kinds of skin cancer are the most common). Black women are more likely than white women to die of breast cancer.

The 5-year survival rate indicates how many patients survive cancer for at least 5 years after it is discovered. The term “percentage” refers to the number of people who are a part of a group of 100 Women with non-metastatic invasive breast cancer had a 5-year survival rate of 90% on average. Women with non-metastatic invasive breast cancer had an 84 percent chance of surviving for ten years.

The 5-year survival rate of women with invasive breast cancer is 99 percent if the cancer is exclusively found in the breast. This stage is found in 63% of breast cancer patients. In the United States, adolescent and young adult females aged 15 to 39 are less likely (47 percent) than women over 65 to be diagnosed with breast cancer at an early stage (68 percent ). This might be because, unless someone is at greater risk, most breast cancer screenings don’t start until they’re 40 years old.

When women are first diagnosed with breast cancer, six percent (6%) of them have cancer that has progressed beyond the breast and regional lymph nodes. This type of metastatic breast cancer is known as “de novo.” New therapies enable many patients with breast cancer to retain a decent quality of life for a long period, even if the illness is discovered at a later stage.

According to the collaboration study “Global Cancer Statistics 2020” from the American Disease Society (ACS) and the International Agency for Research on Cancer (IARC), female breast cancer is the most often diagnosed cancer for the first time.

According to the research, 19.3 million new cancer cases will be diagnosed in 2020, and over 10 million people will die from cancer-related causes, according to CA: A Cancer Journal for Clinicians. Overall, the statistics showed that 1 in 5 men and women in the globe get cancer throughout their lifetime, with 1 in 8 men and 1 in 11 women dying from it.

The study covers cancer incidence and death at the worldwide level, based on sex, location, and degrees of social and economic development. Furthermore, the article addresses associated risk factors and potential preventative strategies for ten main cancer types, which account for more than 60% of newly diagnosed cancer cases and 70% of cancer-related fatalities. Female breast cancer was determined to be the most often diagnosed cancer type, with an expected 2.3 million new cases (11.7%), followed by lung (11.4%), colorectal (10%), prostate (7.3%), and stomach (5.6%) cancers.

It was also shown that the incidence of breast cancer is rising in nations with historically low rates of the disease. Furthermore, despite the significantly lower incidence rates, breast cancer death rates among women in transitional nations were considerably higher than those among women in transitioned countries (15 and 12.8 per 100,000, respectively) (29.7 and 55.9 per 100,000, respectively).

The authors of the research said, “Dramatic changes in lifestyle and the built environment have had an influence on the prevalence of breast cancer risk factors such as excess body weight, physical inactivity, alcohol use, delay of childbearing, fewer childbirths, and less breastfeeding.” “As these variables linked with social and economic transition become more prevalent, they tend to converge toward the risk factor profile of transitioned nations, decreasing worldwide disparities in breast cancer morbidity.”

Lung cancer, with a projected 1.8 million fatalities (18%), remained the largest cause of cancer mortality, followed by colorectal (9.4%), liver (8.3%), stomach (7.7%), and female breast (6.9%). Lung cancer death rates are 3 to 4 times higher in transitioned nations than in transitioned countries; but, if tobacco usage rates alter, this trend may shift.

According to the research, 28.4 million additional cancer cases would be diagnosed globally in 2040, up 47 percent from 2020.

Women in the developed and developing worlds are both affected by breast cancer. Breast cancer kills 2.09 million people worldwide, according to the World Health Organization. In India, it is the most prevalent cancer among women, accounting for 14% of all malignancies. It may strike anybody at any age, but in India, rates begin to climb in their early thirties and peak between the ages of 50 and 64.

Owing to advancements in early identification and treatment, the number of women who died of breast cancer has dropped by 41% from 1989 to 2018. During that time, almost 403,000 breast cancer deaths were avoided.

It’s important to remember that these figures are averages, and each person’s chance of recovery is determined by a variety of factors, including the tumor’s size, the number of cancer-bearing lymph nodes, and other characteristics of the tumour that influence how quickly it grows and how well the treatment works. As a result, determining each person’s chances of surviving might be challenging.

Rate of New Cancers in the United States, 2018

Female Breast, All Ages, All Races and Ethnicities, Female 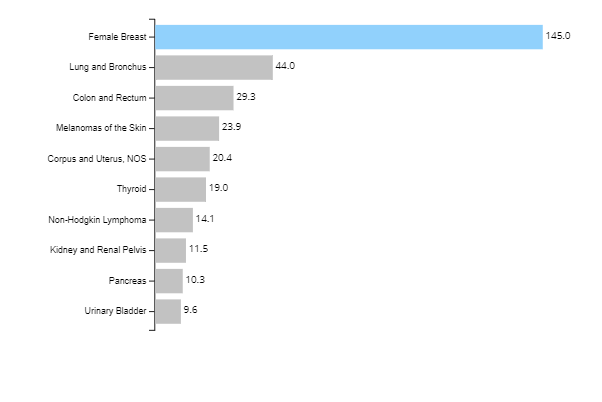 In the United States, cancer is only second to heart disease as the major cause of mortality. (Every year, only lung cancer claims the lives of more women.)  Cancer is the cause of one out of every four deaths in the US. Breast cancer kills around 1 in every 39 women (about 2.6 percent ).

Breast cancer death rates in women under 50 have been stable since 2007, while they have continued to decline in older women. The mortality rate decreased by 1% a year from 2013 to 2018. These reductions are thought to be due to earlier detection of breast cancer through screening and more awareness, as well as improved therapies.

Breast cancer will be diagnosed in 2.3 million women globally in 2020, with 685 000 fatalities. Breast cancer was the most common cancer in the world as of the end of 2020, with 7.8 million women surviving who had been diagnosed in the previous five years. Breast cancer claims more disability-adjusted life years (DALYs) than any other kind of cancer in the world. Breast cancer affects women of all ages after puberty in every country in the globe, with rates rising as they become older. From the 1930s until the 1970s, breast cancer mortality remained relatively stable. Early identification programs along with various types of therapy to eliminate invasive illness led to improvements in survival in the 1980s.

Lifetime Cancer Risk: According to 2016–2018 estimates, around 12.9 percent of women will be diagnosed with female breast cancer at some point in their lives.

The number of people living with female breast cancer in the United States was predicted to be 3,676,262 in 2018.

The cancer stage at diagnosis, which refers to the degree of a disease’s spread throughout the body, influences treatment options and has a significant impact on survival time. In general, cancer is considered localised if it is discovered exclusively in the area of the body where it began (sometimes referred to as stage 1). The stage is regional or remote if it has spread to another section of the body. The earlier a woman is detected with female breast cancer, the higher her chances of surviving five years following her diagnosis. Female breast cancer is detected in 63.1 percent of cases in the local stage. Localized female breast cancer has a 5-year relative survival rate of 99.0 percent. 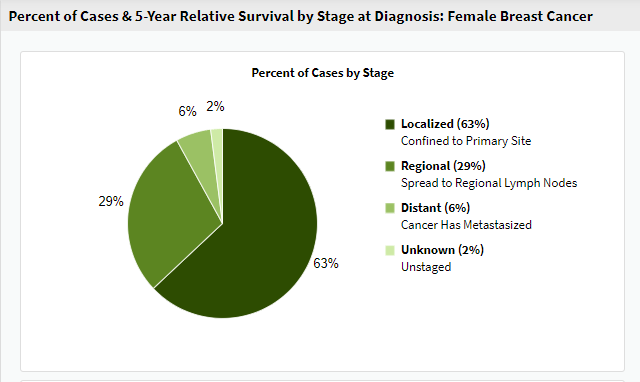 How common is cancer?

In 2021, it is expected that 281,550 new instances of female breast cancer will be diagnosed, with 43,600 individuals dying from the disease.